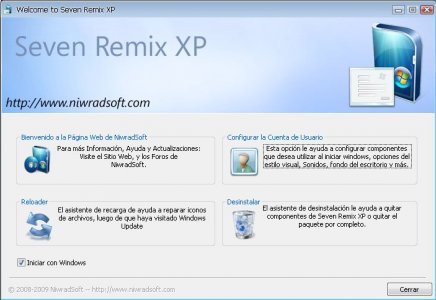 One of the features people has liked a lot of the future Windows Vista is, as always, the new look and feel of its interface, although this time is similar to the one that we can enjoy in Windows Vista.

If you have seen some previews and you are one of those millions of users who like the future interface but is still running Windows XP, now you can enjoy the future Seven interface on Windows XP, you only need Seven Remix XP.

Seven Remix XP is an excellent application that will transform your XP into Seven. Remember that Windows Seven is thought to be released in late 2010, so you'll be able to enjoy its interface one year before the rest of your friends, surprise them.

The program modifies the main areas of windows; from the desktop to the start menu, passing by sounds, fonts, cursors, startup screen, wallpapers and more. In short, the future Seven visual style in your XP.

Seven Remix XP is very easy to install and it doesn't require any third-party program. Finally, if you don't like it when you'll install it, don't worry, it won't break your system when uninstalled.